In this post, we’ll walk through a brief introduction to concurrency and one of Haskell’s best tools for dealing with it: software transactional memory (STM). We’ll then use STM to build a simple but powerful asynchronous job queue.

What is a Job Queue

I’m going to start off with a problem definition because I think it helps clarify when and why you might reach for a tool.

Sometimes when you’re building a system, you want to defer computation to some other point in time. Let’s say that we don’t really care when it happens, as long as it isn’t now. We might have a user waiting on the other side of a request, and we’re worried that the computation will be time intensive.
Maybe we know we’re going to have a lot of expensive computations to make all at once, and we want to spread them out to smooth the load on our systems.
Maybe we only want to compute something once a day, and we want to wait and stack up all of our needs to send at a single time.
Whatever the case, we want to defer that action until later. We’ll come back to this idea in a few minutes, but first let’s side step into concurrency.

Comparison to other multi-threading primitives like semaphore, mutex, and locks

Take this section with a grain of salt: at this point in my career I’ve written a lot more STM code than I have parallel processing code in other languages. I also read this again to remind myself of the differences: https://stackoverflow.com/questions/2332765/what-is-the-difference-between-lock-mutex-and-semaphore

I think it’s important to call out these structures for a couple of reasons.
First, as a point of differentiation. STM isn’t a Haskell specific system - you can find implementations in a bunch of other languages according to wikipedia. 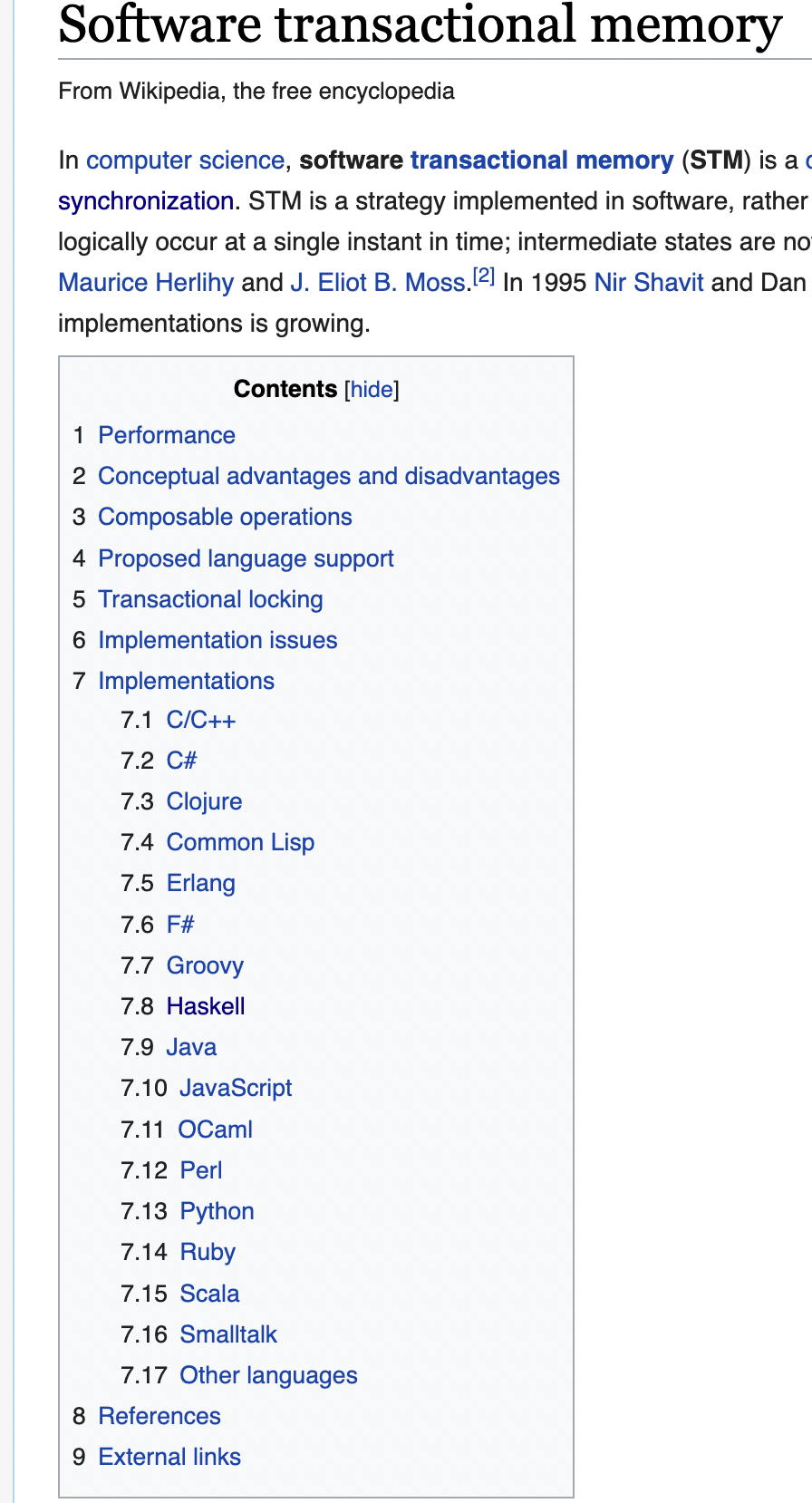 Second, knowing what other strategies exist can make it easier to know what tool to reach for, but I also think a breadth of knowledge in programming can help people know when to research more and at least have terms to lookup when they are working on a problem. For instance, knowing that STM is great and understanding when to apply a semaphore might lead you to discovering the TSem library.

Third, you can still screw up STM code. It’s not some panacea for concurrent programming. Though it makes things easier, it’s still tricky code! Traditional tools for dealing with locks can be useful to orchestrate threads and debug them when something goes wrong.

What STM is at the basic level

Put as simply as I can STM provides a way to have data which threads can transactionally access.

Transactionally there is a pretty important term, in the paper Software Transactional Memory by Shavit and Touitou they define it as:

A transaction is a finite sequence of local and shared memory machine instructions:

Any transaction may either fail, or complete successfully, in which case its changes are visible atomically to other processes.

atomically is an important word here, and you’ll see it come up in the library and our example later as well.

if one thread executes an atomic operation, that means there is no way that another thread could see the half-finished result of the operation. The system can only be in the state it was before the operation or after the operation, not something in between.

If you’re starting to think in Haskell types, that means we define a function atomically which moves us from the specific context of STM actions in to IO in a single, uninterruptable step: atomically :: STM a -> IO a.

Why STM is so great

Composability is the winning feature of STM. Because both the programmer and the compiler can reason about individual blocks of code, we can more quickly write and more importantly understand concurrent programs.

Composability is this fancy word that gets thrown around a lot, but I think it’s not always obvious what people mean when they say it. In terms of STM programs, composibility is the ability to take two random pieces of STM code and combine them into a new single function without the risk of deadlocks:

I found this good example on stackoverflow which illustrates further: 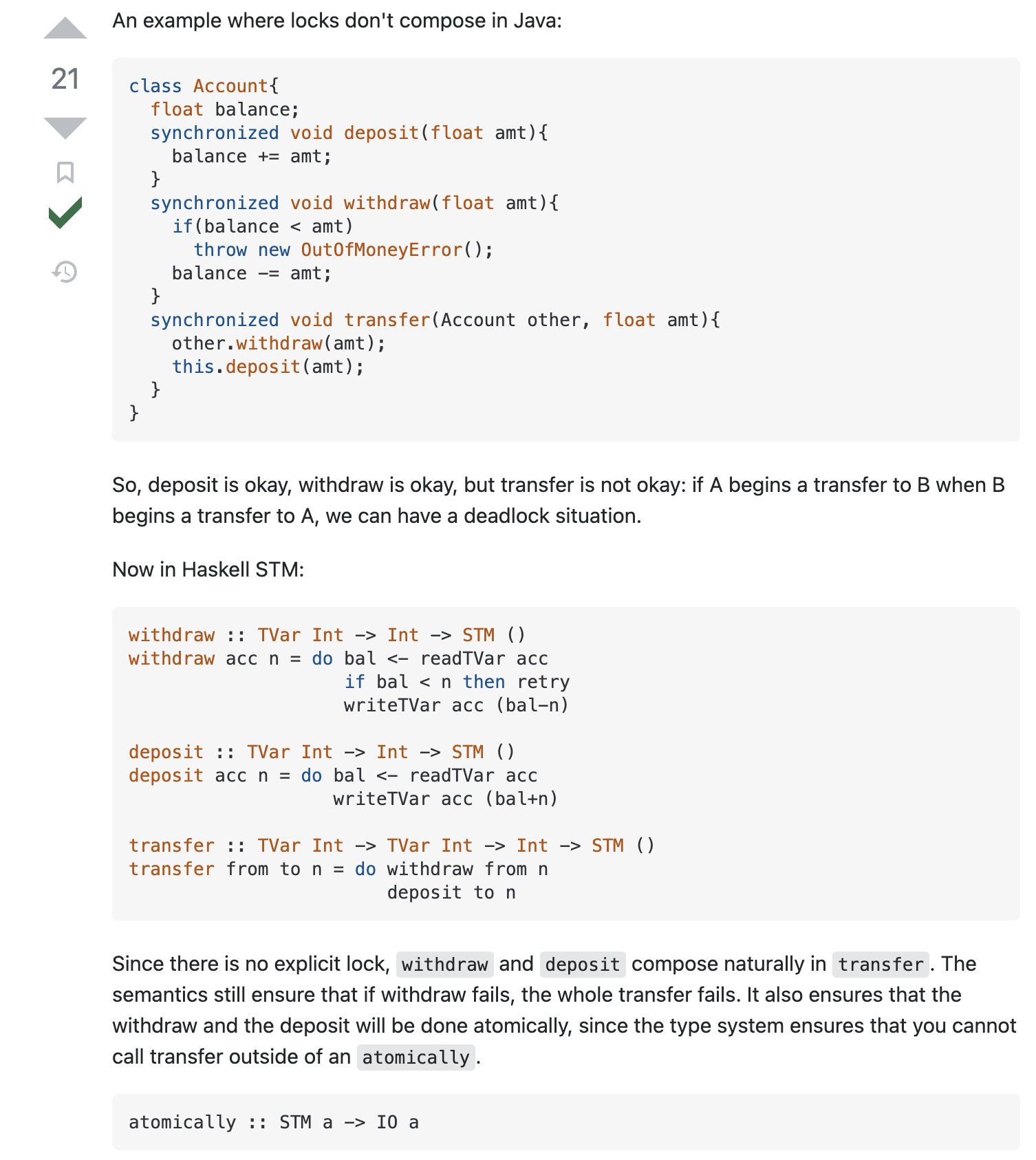 Reading concurrent programs is one of the hardest skills. The real benefit is that any other programmer can come through later and understand it faster than any concurrent code written in the other multi-threading styles.

With all of that said, let’s move into the example I promised. 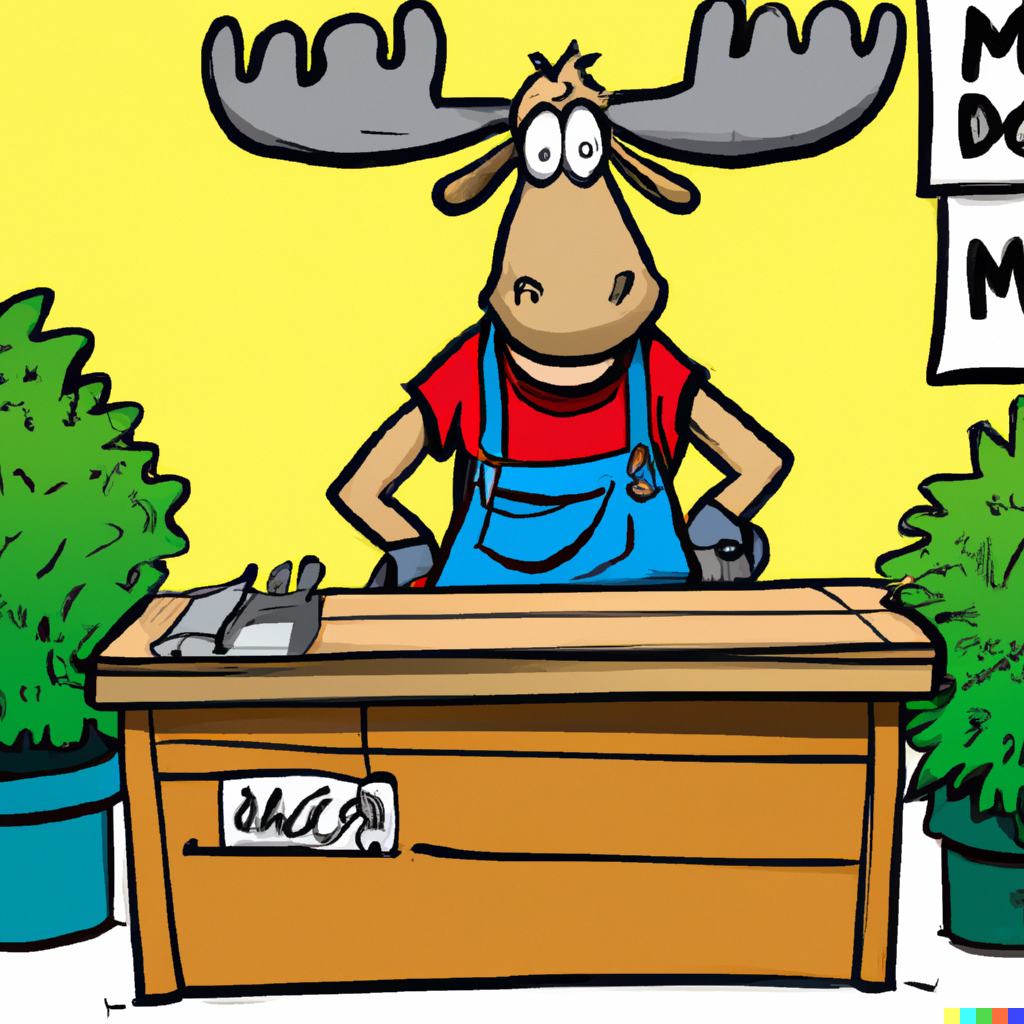 Periodically, people will call me to get some plants delivered. I write down their order, and promise to deliver later that day. Once per day, I grab my list of orders, load up the truck, and go bring everyone their plants.

In haskell, this could be expressed with the following CLI program. 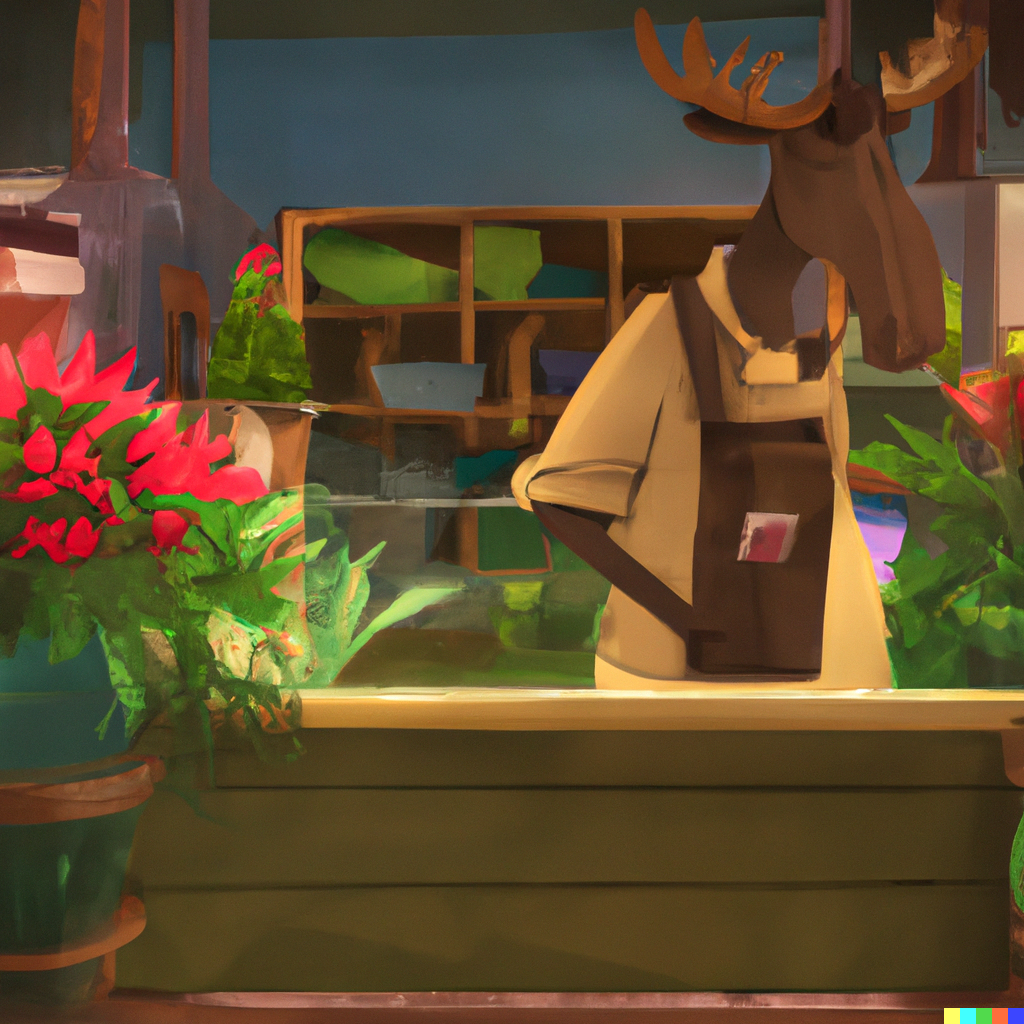 As it turns out, I love growing things and have the best selection of annual flowers around, so I get a lot of business. All of the sudden, I find myself having to hire a dedicated delivery driver. When it’s just me writing down the orders and then making the deliveries, I don’t really have to worry about communication. But now, I need to make sure that when I write down orders, I know whether or not my delivery driver is already out on the road. In other words, I need to know if this order goes onto a current list for deliveries or a new list for deliveries.

We can also write some code to reflect this challenge, and this will be our first use of STM.

I want to slightly modify the code above and show you a common mistake.

This code seems pretty close to the previous version, but one important line is missing. That missing line will cause the forked thread to deadlock. When you try to run it, the GHC runtime is able to detect this deadlock, kill the thread, and give you an incredibly helpful error message.

Now, I know it doesn’t look that impressive. But after working with concurrent systems for awhile, I’ve gained to an immense appreciation for the fact that not only can GHC detect this deadlock it can specifically tell you that you’re running in an STM transaction that gets stuck.

If you were trying to diff the previous sections, the bug here was not instantiatng the TMVAR with an empty list:

The double “emptiness” of the TMVar and the list here often lead to me forgetting this step, so I get to see the thread blocked indefinitely error a fair amount. 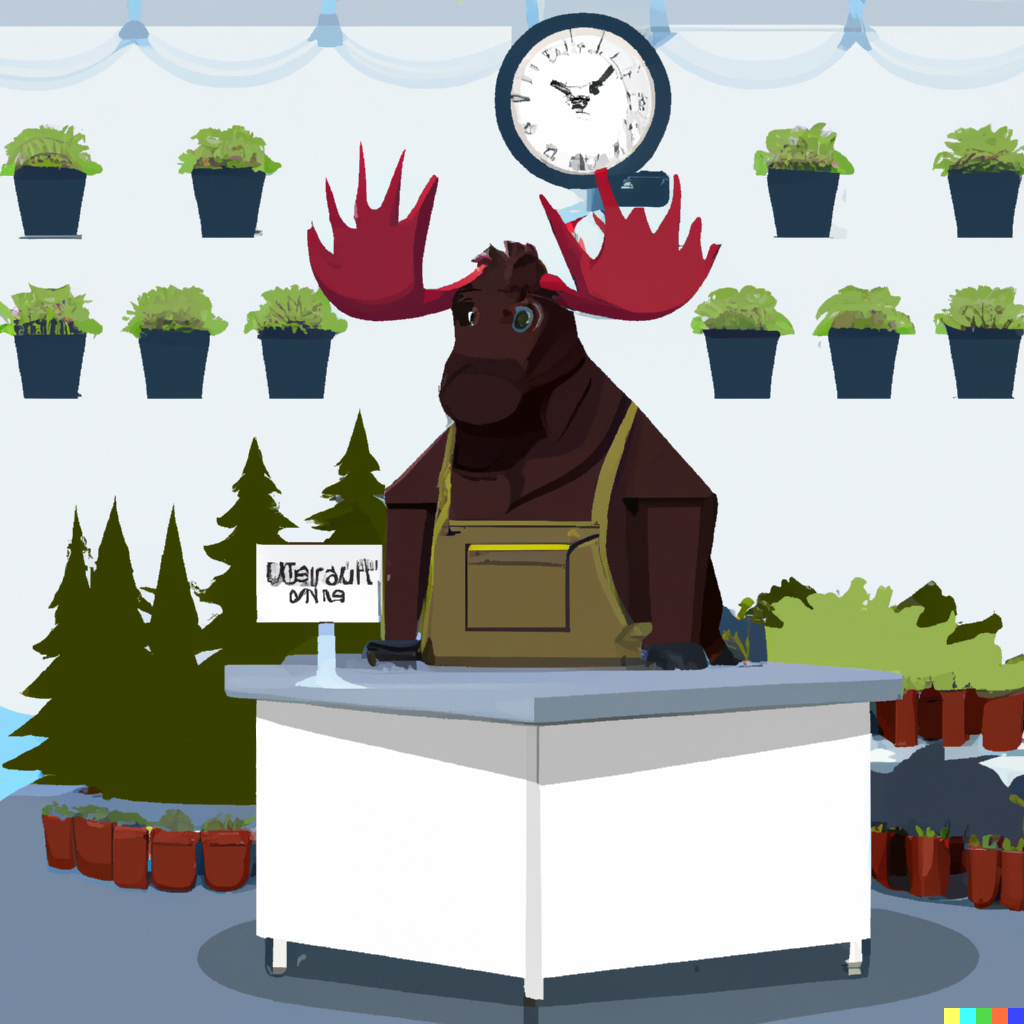 Next, let’s assume I’m really good at growing things (I’m not actually, but hey we can all dream right?) and my business explodes and all of the sudden I have one hundred delivery drivers and multiple people working the phones to take orders. How am I going to orchestrate all of this?

There are a couple of important things to note in running a business like this:

Okay the analogy might be leaking through to our implementation here.

Most programmers have a tool for this, but they might call it something different depending on where they learned it. With my background, I’ve always called this kind of work a “Job Queue”. The simplest version is really easy to imagine, and equally trivial to build. We just have one system that writes instructions down, then executes them later. The complexity immediately jumps as soon as we have two different processes: one to write and one to read. Then, we have another jump in complexity when we have multiple processes reading and writing at the same time.

Quickly, the right solution to your problem involves utilizing multithreading processing techniques. These often sound scary, but in haskell, it’s much easier to deal with.

You may have noticed an extra bit of STM code in that previous section. If you take it out, here’s what your stdout output looks like:

STM is such an easy and powerful tool, I found myself, somewhat ironically, just reaching for it here to clean up my stdout output entirely separate from my motivating example of why STM is great! 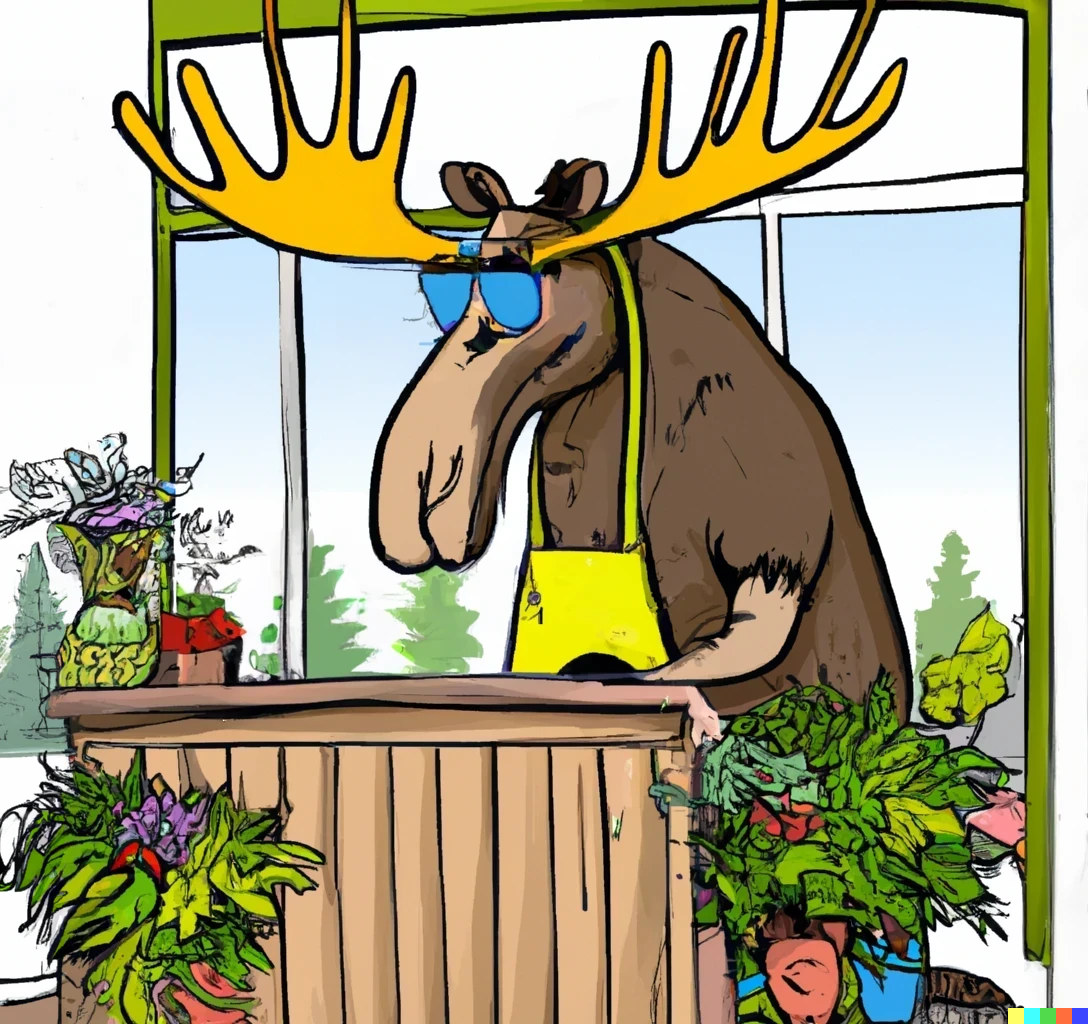 Last, let’s showcase composability here with an example similar to the one from StackOverflow we looked at earlier.

(You can get access to a full copy of the code in this post here. There might be a GHC extension or two missing - I built it locally with my normal set of extensions enabled.)

This site is hosted with GitHub Pages.